God, divine Mind, revealed to Mary Baker Eddy the momentous fact that He is the only lawgiver. The Bible, loved and studied by every Christian Scientist, contains many references to the law of God showing clearly that its inspired writers were cognizant of the fact that God, Principle, or cause, is the source of divine law. If we acknowledge God to be supreme, as He assuredly is, it logically follows that we must also acknowledge His law to be supreme. While many sincere religionists readily admit God and His law to be the unchallenged governing power in the kingdom of heaven, they are very reluctant to question the so-called authority of physical laws. Such an attitude is easily understandable until one's thinking has been spiritually illumined be the teachings of Christian Science. 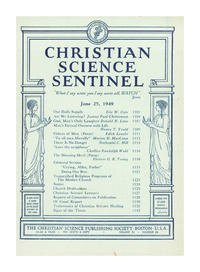