I first heard of Christian Science in Bulawayo, Southern Rhodesia, in 1923. It certainly was a case of "man's extremity" being "God's opportunity," for every evil under the sun seemed to have beset me. My small son, five and a half years old, had been drowned in Portuguese East Africa, and soon after that my second son became very ill with colitis. The doctor advised me to take him to England to a specialist. I did this, and everything possible was done for him. At that time domestic difficulties arose, and I had to return quickly to Africa. As the child was not well enough to travel, the nurse I had engaged said she would continue to look after him in England if I would put him in the care of a doctor under whom she had worked. I did this, but as I fretted so for the child, he was returned to me about six months later with the verdict that the doctor could do no more for him. It was suggested, however, that he might grow out of the trouble when he reached the age of fourteen.

Soon after he arrived in Africa, the trouble became much worse, so that in desperation I prayed to God to spare me this child. My prayer was undoubtedly answered, although I did not realize it until some years later, for a few days afterwards I heard of Christian Science whilst telling my woes to a friend. She said, "Why don't you try my religion?" It was Christian Science. She gave me a copy of the Sentinel to read, and I thought it was the most comforting thing I had ever read. 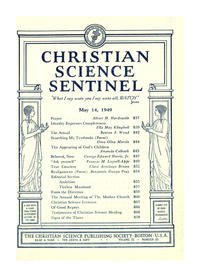