Grace M. Sturhahn with contributions from George A. H. Sturhahn

When I first became interested in Christian Science and read "Science and Health with Key to the Scriptures" by Mary Baker Eddy, I was not able to grasp the meaning of many of the statements. I mentioned this fact to a relative, who was a Christian Science practitioner. She told me not to let that discourage me, because the statements were true whether I understood them or not, and the truth heals. She also explained that in order to grasp the truth, my thought must be changed from the material standpoint to the spiritual, and assured me that this change would gradually take place as I continued reading and studying. Through the years I have found this to be true. Mrs. Eddy says (Science and Health, p. 495), "Study thoroughly the letter and imbibe the spirit." She also says of Science and Health (ibid., p. 147), "The book needs to be studied, and the demonstration of the rules of scientific healing will plant you firmly on the spiritual groundwork of Christian Science."

In the beginning even though my husband and I did not fully understand the statements in Science and Health, we would read from this book whenever error presented itself, and we found that such ills as fever, colds, and headaches were quickly destroyed. In a short time my husband realized he was healed of car sickness, which had been considered hereditary; also he was freed from kidney trouble of several years' standing. He was healed simply by reading the Lesson-Sermon in the Christian Science Quarterly regularly, attending the church services, and putting into practice the statements of Truth we grasped in our study. The healings have been permanent, for they occurred over twenty years ago. 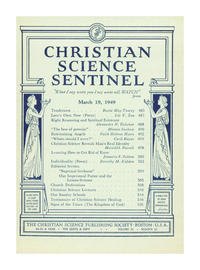