The Apostle Paul was an instrument chosen of God to bear His name to "the Gentiles, and kings, and the children of Israel." When he traveled through Greece, he was so filled with holy zeal for the accomplishment of his mission that he endeavored to communicate to his many successive hearers his own clear understanding of God. This understanding so dominated his thought that he could not endure the sight of cities given to idolatry. Illumined by the Holy Ghost, he endeavored to light for his listeners the torch of revelation as well as convey to them the certainty of the one God.

Speaking before the Athenians of this one God, the apostle said, "He giveth to all life, and breath, and all things;" and, "In him we live, and move, and have our being," ending with a quotation from one of their own poets, "For we are also his offspring." Thus the apostle summed up his message of the one God, the one creator, who "hath made of one blood all nations of men."

Send a comment to the editors
NEXT IN THIS ISSUE
Article
TIME, A MORTAL THOUGHT 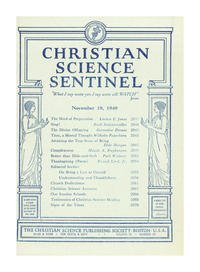