"THE VOICE OF TRUTH TO THIS AGE"

The word "theology" is necessarily of interest to students of Christian Science, for when understood in its scientific meaning it reveals the truths of God and man. Mary Baker Eddy writes in "Unity of Good" (p. 13): "Science reverses the evidence of the senses in theology, on the same principle that it does in astronomy. Popular theology makes God tributary to man, coming at human call; whereas the reverse is true in Science." In the theology of Christian Science, God ever speaks or calls to man, and the student who is listening and keeping thought receptive hears the divine voice.

Bible characters have given abundant proof that as they trustingly turned to God and listened for His voice they felt His presence and heard Him speak in the quiet sanctuary of their uplifted consciousness. At times it appeared to be audible, as in those transcendent moments which followed the transfiguration (see Luke 9:35). 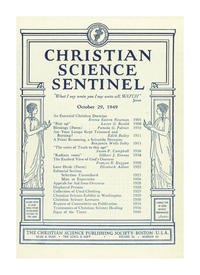