In the third chapter of Acts is recorded the story of a man, lame from birth, who was laid daily "at the gate of the temple" to ask alms of those who entered. Peter and John came to the temple one day. As they approached the man, Peter looked at him and said (verse 6), "Silver and gold have I none; but such as I have give I thee: In the name of Jesus Christ of Nazareth rise up and walk." The account goes on to say that Peter "took him by the right hand, and lifted him up: and immediately his feet and ankle bones received strength. And he leaping up stood, and walked, and entered with them into the temple, walking, and leaping, and praising God."

This was benevolence in its truest form. Peter had no money to give, nor did he busy himself in raising a fund to care for the man's need. He did not even have to take the man into more favorable surroundings, where he could receive better care, before healing him. He healed him right there and then "in the name of Jesus Christ." Peter must have seen in great degree the spiritual and perfect selfhood of that man, eternally expressing health, activity, and dominion. 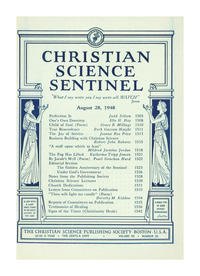