Nearly two thousand years ago the following incident took place when Paul was in prison in Jerusalem (Acts 22:27, 28): "The chief captain came, and said unto him, Tell me, art thou a Roman? He said, Yea. And the chief captain answered, With a great sum obtained I this freedom. And Paul said. But I was free born."

The soldier had purchased with much money the liberties vouchsafed at that time to a Roman citizen. On the other hand, Paul, knowing his rights as a son of a Roman, declared himself to be free born. Christian Science teaches that man is created in God's own image, as the Bible declares, and that boundless freedom is his inalienable birthright as the spiritual reflection of God. 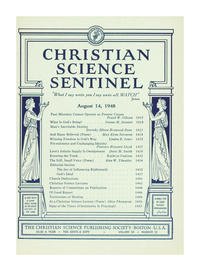