My first experience with Christian Science...

My first experience with Christian Science was when my father, who was a veterinarian, took me to a practitioner when I was a very small child. It was not until many years later that I became interested enough to give it any thought other than to ridicule it as a result of my misconception of the teachings of Mary Baker Eddy, its Discoverer and Founder.

One of my first proofs that Christian Science is an active, available power was when I was having an auction sale and leaving my farm in the Northwest. It seemed imperative that I sell out and leave in approximately ten days. There was very little time to get sale bills printed, to advertise, and so on. My meager understanding of Christian Science had come mostly from reading a few Sentinels and a little from "Science and Health with Key to the Scriptures" by Mrs. Eddy. However, it was enough to persuade me to put the outcome in the hands of God. The day of the sale was the coldest I have ever experienced. It was many degrees below zero, so cold in fact that hardly more than a dozen people were there. Apparently none but prospective buyers attended, for when the sales were added up the total amount was about two hundred dollars more than I should have expected under favorable conditions.

Send a comment to the editors
NEXT IN THIS ISSUE
Testimony of Healing
In Isaiah 45:5 we read, "I girded... 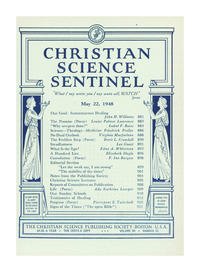