"HE IS RISEN FROM THE DEAD"

Death can be overcome! Christ Jesus' resurrection proved this. His emergence from the tomb proved that an understanding of God, eternal Mind, as the Life of man annihilates the forces that would produce death. The belief of centuries that there comes a time when man must die is no more true than the ignorant belief mortals entertained for thousands of years that the earth is flat, and that to go far out to sea would inevitably mean falling off the earth. Courageous navigators challenged and destroyed that belief. With courage born of spiritual understanding the Master challenged and disproved the mistaken belief that life can be ended by physical forces.

The Master knew that his mission included the rending of the veil of mortality "that is spread over all nations" (Isa. 25:7), and he foretold his rising after the crucifixion. Never in human history had an individual understood sufficiently man's oneness with eternal Life, God, to nullify the destructive material forces that appeared to have put an end to his life, and through his realization of man's spiritual unity with indestructible Mind demonstrated the unbreakable continuity of conscious being.

Send a comment to the editors
NEXT IN THIS ISSUE
Editorial
NEITHER COMING, NOR GOING 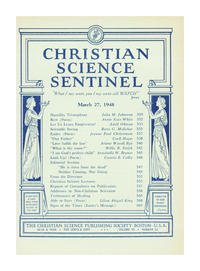