THE STAR OF BETHLEHEM

On a clear winter night some nineteen centuries and more ago, many were troubled, sick, and for the most part enslaved. The great Roman Empire, after a triumphant conquest of practically all the lands surrounding the Mediterranean, ruled autocratically the people it called its subjects. So widespread was its domain and so firmly entrenched its dominion, it must have seemed the most powerful force in all the world.

Yet on that night a star was shining through the darkness of oppression and fear—a glorious, wonderful star heralding a new era of time and thought, the downfall of despotism and slavery, the advent of the Prince of Peace. Wisemen saw the star and joyfully followed it to where the infant Jesus lay. Shepherds, watching their flocks by night, heard the heavens filled with angelic songs of "glory to God in the highest, and on earth peace, good will toward men." And they too sought and found the child.

Send a comment to the editors
NEXT IN THIS ISSUE
Article
HOLD ON AND LET GO! 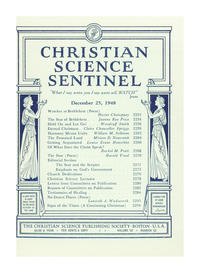