An experience which has been...

An experience which has been very sacred to me, and which I should enjoy sharing with others through our periodicals, occurred in January of 1940. Prior to this time I had pondered the thought that Mind is never unconscious (see Science and Health by Mrs. Eddy, p. 588), and also had heard a Christian Science Sunday School pupil relate in a testimony that by his knowing the presence of governing intelligence, a driverless car which had started rolling down an inclined street had gone over to the curb and stopped. I had thought often about these truths, but did not thoroughly understand them.

Returning in my car from a Sunday morning service at a Christian Science church, I had left a friend at her home and was proceeding homeward when one block south and one block west of our home another car collided with mine, and I was knocked unconscious. Later I learned that my car, which I had just a second before endeavored to turn to the left to avoid the other car, jumped the curb, just missed a telephone pole, and proceeded slowly about seventy-five or one hundred feet to a mound of earth about two feet high. At this point the steering wheel locked and the car pointed directly for the corner of my own garage. The car slowly crossed these vacant lots, going from the southwest corner of this square to the northeast corner, and in front of my house crossed the street along which another car was being driven west.

Send a comment to the editors
NEXT IN THIS ISSUE
Testimony of Healing
The definition of "fear" given... 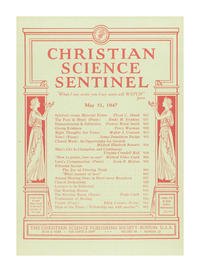