Although Ralph and his sister Barbara lived on a farm, they attended a Christian Science Sunday School in a nearby city. Ralph tried to apply the truths he learned in Sunday School to the problems of country life. He had been successful in applying his understanding of Christian Science in school, at play, and at home. Then one day his father said: "Ralph, I'm going to turn over the care of the pigs to you. You feed them."

Every day Ralph took good care of the animals. About a month after he had started caring for the pigs, Ralph heard from a neighbor that some of the farmers near by were having difficulty with a disease that was troubling pigs. That night he thought about the situation in the light of Christian Science. The neighbor had gone on to say that the malady was apparently sweeping across the fertile valley toward the farm on which Ralph lived. By the fireplace that night Ralph expressed all the gratitude that he could for past benefits which had come to him as the result of his study of the Christian Science textbook, "Science and Health with Key to the Scriptures" by Mary Baker Eddy.

Send a comment to the editors
NEXT IN THIS ISSUE
Editorial
Is Discipline Welcome? 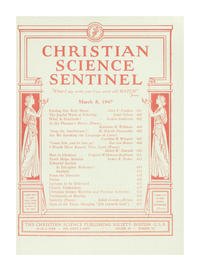