"SONGS IN THE NIGHT"

Often throughout human history has there been a call for decisive action; every crisis has demanded the recognition and avowal of the supremacy of right. Mary Baker Eddy noted this in her remarks one Fourth of July (Miscellaneous Writings, p. 176): "The great theme so deeply and solemnly expounded by the preacher, has been exemplified in all ages, but chiefly in the great crises of nations or of the human race. It is then that supreme devotion to Principle has especially been called for and manifested." Such a demand is described in the closing chapters of the book of Job. Bewailing the contempt of outcasts and the suffering inflicted upon him, Job blamed God for his misfortunes, saving (Job 30:32), "Thou liftest me up to the wind; thou causest me to ride upon it, and dissolvest my substance."

Protesting innocence, he declared (Job 31:5,6), "If I have walked with vanity, or if my foot hath hasted to deceit; let me be weighed in an even balance, that God may know mine integrity." Listening to this recital was Elihu, a young man filled with zeal who pointed out the error of charging God with injustice and the necessity for one to stand up to his trials and pray the prayer of repentance and reformation. He wished to bring out that when one recognizes as evil the error which would tempt him, sees sin for what it is and acknowledges that it is not his true being, he becomes receptive to the truth which will deliver him. 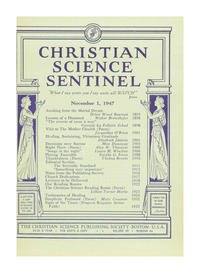