One of Julie's greatest desires was to have a business career. As she applied her understanding of Christian Science to each experience which came to her upon entering the business world, she became aware in ever greater measure of God's bountiful goodness and loving provision for all her needs. Thus, she gained a better sense of her true work and daily found herself a step nearer to the fulfillment of her desire and the working out of her individual salvation.

Everything rolled along smoothly and joyously for several months, until one day some of her associates began to challenge her stand against the indulgence of smoking and drinking. From the first she had accepted their friendliness and they in turn had not seemed to mind her being different. Now, however, they repeatedly tried to get her to be one of them. Julie let what they said and did bother her, so that after a time she became very miserable when in their company.

Send a comment to the editors
NEXT IN THIS ISSUE
Poem
BE STILL! 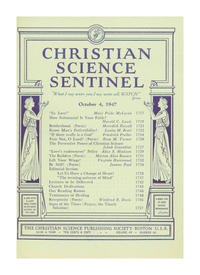