The Practicability of Christian Science

How tardy is mankind in awakening from the dream of life in matter to the recognition of true selfhood as the expression of Spirit! Yet Jesus made untiring efforts to awaken the people of his time. When John the Baptist, discouraged perhaps because of persecution and imprisonment, sent a message to him asking for confirmation of his Messiahship, Jesus referred to the works of healing. He knew that these infallible, practical proofs of the divine source of his teaching would dispel the doubts of him who a little while previously had seen past the material mask and had recognized and announced the Christ in these words (John 1:29): "Behold the Lamb of God."

Again, when the multitudes followed John the Baptist into the wilderness, Jesus knew that they were searching for something more than the personal John. Thus in his speech recorded in the eleventh chapter of Matthew the Master endeavored spiritually to awaken them to a clearer view of what they were very dimly seeing through the density of their material thinking. He encourged them to open their thought to become aware that the impelling motive of their search was to find something more than "a reed shaken with the wind," more than "a man clothed in soft raiment," yes, even "more than a prophet." Though they knew it not, they were, in their search for the Messiah, seeking the spiritual idea of God, clothed in the light of divine Love, which could help them to lift their thought above a sense of life in matter to the true sense of Life as God, Spirit, and bring them freedom from suffering and sin. 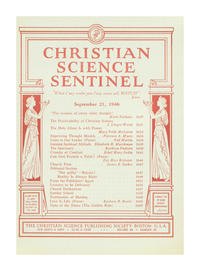