"O death, where is thy sting?"

Many are the students of Christian Science who can testify without reservation that the spiritual light which Mary Baker Eddy has thrown upon the Scriptures has at least taken the sting from death: and is not this the first step in the complete vanquishment of the so-called "last enemy"? Again and again does some Scientist say, "The way I have been sustained and comforted by Truth is a miracle!" Others aver that the experience of a dear one's passing from their sight has, through Science, been robbed of much dread and sorrow, and, instead, an unexplainable peace has been felt. Heartache and a sense of separation have been stilled by the gentle touch of divine Love.

How the great Apostle to the Gentiles would have hailed the coming of Christian Science, whose Christly teachings echo and reecho the strain of his mighty declaration (I Cor. 15:55-57): "O death, where is thy sting? O grave, where is thy victory? The sting of death is sin; and the strength of sin is the law. But thanks be to God, which giveth us the victory through our Lord Jesus Christ."

Send a comment to the editors
NEXT IN THIS ISSUE
Editorial
How Do You Feel? 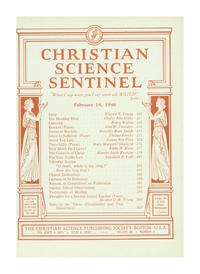