It is certainly right to expect that those who are honestly studying and striving to apply the teachings of Christian Science will show the effects in healthier bodies, better poised mentalities, and, in general, improved conduct and a higher standard of action and life. On the other hand, anyone who judges Christian Science simply by the immature understanding that Christian Scientists have yet gained of it, and by the measurable application of it that they have accomplished in their human lives, is making a serious mistake which injures himself more than others, for by so judging he may unwittingly raise a barrier between himself and this healing, satisfying Science of Life, which he sorely needs. 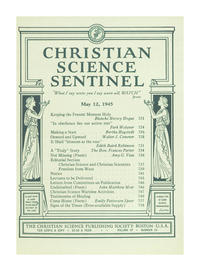