Great care has been taken in this war to prepare men for actual combat by building up their morale and perfecting their technical skill. Pamphlets describing the customs and giving hints on the language of the country to which they were being sent have been issued. In some cases, the theory that only when the combatant hates the enemy will he be free from fear has been adopted and taught as part of the "psychological" preparation.

But let us consider what the Discoverer and Founder of Christian Science, Mary Baker Eddy, says about preparation for combat. On page 115 of "Miscellaneous Writings," of which she is the author, we find, "May God enable my students to take up the cross as I have done, and meet the pressing need of a proper preparation of heart to practise, teach, and live Christian Science!" And on pages 215 and 216 she says: "They have a long warfare with error in themselves and in others to finish, and they must at this stage use the sword of Spirit. They cannot in the beginning take the attitude, nor adopt the words, that Jesus used at the end of his demonstration. If you would follow in his footsteps, you must not try to gather the harvest while the corn is in the blade, nor yet when it is in the ear; a wise spiritual discernment must be used in your application of his words and inference from his acts, to guide your own state of combat with error." 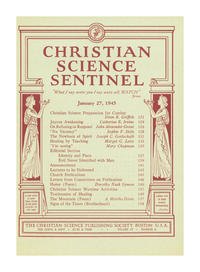