Winning the War of Nerves

Our English word "nerves" has many facets. Aside from the physiological aspect, it may present phases of human thought both desirable and distasteful. For instance, if one is said to have "nerve," he may be either bold, intrepid, and plucky or possessed of effrontery, insolence, and cheek. During the present hectic days of global stress, a new expression has been much in vogue—"the war of nerves." This indicates even another connotation of this many-sided word, for certainly the so-called "war of nerves" is nothing more nor less than the attempt to defeat and confound an enemy by undermining his morale, through striking at his power of endurance, which, Webster says, "is mental rather than physical."

Did not Christ Jesus illustrate how to wage successful war on the carnal mind's miserable argument of unruly nerves, apprehension, fear? Note his experience during a severe storm on the Galilean lake. Whilst the little craft on which he and his disciples were sailing was being tossed about dangerously by the fury of the waves, Jesus was peacefully sleeping. Very evidently the great Teacher was not afflicted with "nerves." When his fellow passengers awoke him, he serenely and without any manifestation of fear "arose, and rebuked the wind and the raging of the water: and they ceased, and there was a calm." Then he asked his awestricken disciples, "Where is your faith?" Did he not indicate that none of them would have been nervous or fearful had they grasped the spiritual truths he had been teaching and exemplifying? Therefore faith, merged into spiritual understanding, is the great panacea for nerves, nervousness, and all that these terms imply. 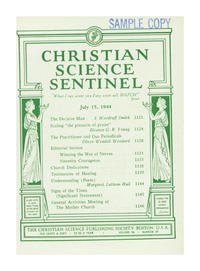