During the past year the Special Committee on Social Security dealing with the compulsory Health Insurance Draft Bill in Ottawa was presented with a brief representing the interests of Christian Scientists and the Christian Science movement.

There were a number of references to Christian Science in the daily newspapers, some of which did not require answering. Three corrective letters were submitted, two of which were published in part. After a profitable talk with an editor of one of the Toronto newspapers, corrective statements of the Committee appeared in a column entitled. "Mary Baker Eddy Not a Spiritualist." 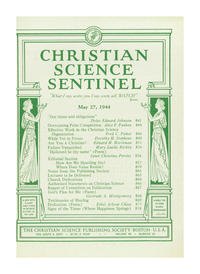