Gloria, a young Christian Scientist, was invited to a Halloween masquerade party and was happily looking forward to an evening of fun. A parade of the masqueraders was to precede the party.

There were goblins, ghosts, pirates, and other mysterious characters in the "masquerade march." The neighborhood resounded with the laughter and hilarity of the paraders, and all present, including interested spectators, were enjoying the fun. Suddenly a latecomer, a silent, masked figure, joined the parade—and for a moment the merriment and laughter of the crowd were silenced. The ghostlike figure wore the strangest mask that any of them had ever seen—a grotesque, fantastic "face" —and the weird form moved silently along, so there was no voice to reveal its identity. Gloria, who had always loved Halloween and other masquerade parties, was frightened at first and shrank from the white-clad, masked figure. Suddenly she hurried away to join some of the familiar "goblins" and other amusing, though mysterious, masqueraders. 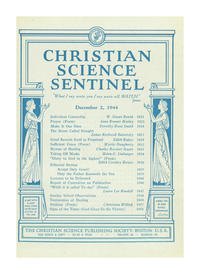