"The brow of the hill"

IT was to the brow of the hill on which Nazareth was built that an angry mob led Jesus, expecting to rid themselves of him by casting him down headlong. But before they could do so, he quietly disappeared from their midst. What must have been their astonishment to find their victim suddenly gone and themselves powerless! This incident is related in the Gospel of Luke. Jesus had been speaking to them in their synagogue and had presented to them the Christ which would heal and save. But they did not want salvation from their false beliefs of materialism and selfishness, and so they planned to get rid of the messenger, the gentle but purposeful Jesus.

Many times, according to accounts in the Bible, did Jesus prove his dominion over material limitations, knowing his true selfhood as the reflection of divine Mind and therefore possessing power over all mortal conditions. In this short sentence Mary Baker Eddy states the truth which Jesus knew and proved, and which we need to use today (Miscellaneous Writings, p. 183): "Man is God's image and likeness; whatever ispossible to God, is possible to man as God's reflection."

Send a comment to the editors
NEXT IN THIS ISSUE
Article
"Am I my brother's keeper?" 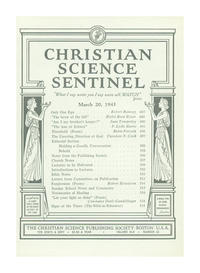