The Mortal Dream Is Untrue

Mary Baker Eddy writes in "Science and Health with Key to the Scriptures" (p. 250): "Now I ask, Is there any more reality in the waking dream of mortal existence than in the sleeping dream? There cannot be, since whatever appears to be a mortal man is a mortal dream."

The unreal testimony of mortal sense and the remedy for belief in it were illustrated to a student of Christian Science by the following experience. One night, in a dream, a woman had a vivid sense of stumbling and falling on a railroad track. Glancing down the track she saw an express train rapidly approaching. With eyes riveted on the train, she became immobile with fear and horror. Even as the ground underneath was trembling, she found herself saying, "If only I could get up!" But a mesmeric fear deprived her of the ability to move.

Send a comment to the editors
NEXT IN THIS ISSUE
Article
Awake! 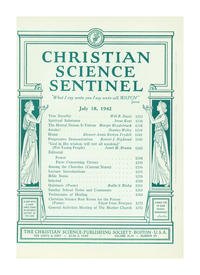