"Lord, what wilt thou have me to do?"

When Paul was on his way to Damascus to persecute the Christians, a blinding light arrested him, "and he fell to the earth, and heard a voice saying unto him, ... I am Jesus whom thou persecutest. ... And he trembling and astonished said, Lord, what wilt thou have me to do?" Consecrated study of these words in the light which Christian Science throws upon them gives rich reward.

The answer that came must have been as startling as was the light which heralded it. Paul learned from it that he must now learn to follow and uphold those whom he had formerly despised and persecuted. Later, in recounting his experience to King Agrippa, he said, "I was not disobedient unto the heavenly vision." His attitude of genuine receptivity to the voice of God was followed by instant obedience. This should prompt us to ask ourselves if we are as obedient in letting go of our old theories and views which are not in accord with Christian Science. Perhaps some social habit of drinking or smoking is holding us back or delaying a healing; or there may be some false theological belief to which we are still clinging, and which has to be given up.

Send a comment to the editors
NEXT IN THIS ISSUE
Article
Eternity, Not Time 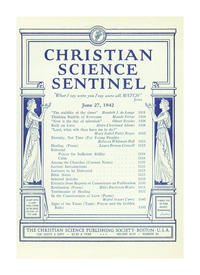