His biographers bear witness to the fact that Jesus prayed, even lingering all night on one occasion in communion with the Supreme Being. These sessions of prayer were far from selfish, for in the morning he mingled with the people to share with them the exhilarating power he had gathered in those enriching silent hours. His constant admonitions to fear not, even to rejoice, were based on his ability to think faultlessly, to see penetratively, and hence to differentiate between the deceptions of materiality and the unseen permanencies of Spirit. He spoke "a parable unto them ... that men ought always to pray, and not to faint."

Jesus had no bank account, no reserve of capital, no political or worldly influence. Yet no one was ever richer, more affluent, more independent. He could pay his taxes from the fish's mouth; he could feed the hungry crowd from the abundance of his compassionate understanding. His prayers and their answers measured his oneness with the Eternal. His faith in God was the basis of his faith in himself as the Son of God. Observing the works he accomplished as a direct result of prayer, the disciples yearned for access to the same spiritual source. No wonder they sought him out and asked, "Lord, teach us to pray." 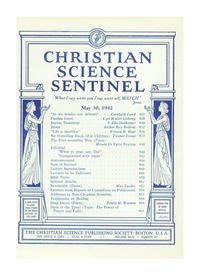