A Report from Texas

The Committee on Publication for Texas is happy to report that in its work of safeguarding the interests of Christian Science the fullest co-operation has been received from the sponsors of the various bills in which the interests of Christian Science were involved. All these bills were "on the table" in committee at the close of the legislative session. The past session was the first session of the legislature following the one which, in 1939, adopted the amendment to the Medical Practice Act, by which Christian Science practitioners became clearly exempt from the provisions of the Medical Practice Act "in the exercise of the principles, tenets, and teachings of the church of which they are bona fide members."

The past year has presented many problems to newspapers, and our friends, the editors, did not give us so much space as in former years; however, their generosity was evidenced in the fact that one hundred and thirty-two newspapers devoted one hundred and thirty-six columns to the report of the Annual Meeting of The Mother Church, and one hundred and forty-four of the official pictures which were offered to them in conjunction with the report were carried. This was seventeen more than had ever been published before in any one year.

Send a comment to the editors
NEXT IN THIS ISSUE
Testimony of Healing
I am glad to avail myself of... 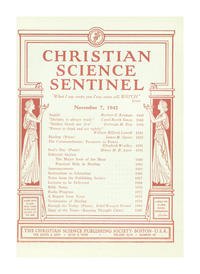