A Young man who had recently secured a position as salesman decided he was not fitted for such work. Although he seemed to have many assets necessary to succeed, he nevertheless was fearful and ill at ease in attempting to sell to prospective clients. Those few friends to whom he felt he could confide, told him to have courage, to be vigilant, and soon he would see a large measure of success. But, despite all resolutions to be courageous and vigilant, he still seemed to lack confidence in his ability, and therefore had no expectancy of business.

Having had a casual interest in Christian Science, he finally went to a friend, a Christian Scientist, and told him that he was considering giving up his position. The Christian Scientist asked him if he honestly believed that what he had to sell would be helpful to those who bought. The salesman said that to the best of his knowledge it would. Not only did he believe his services would help others, but he would himself buy what he offered, if he were in a position to do so. 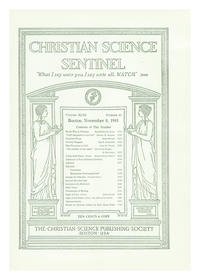