Do Christian Scientists Believe in War?

[This article is based on an editorial by Judge Septimus J. Hanna, which appeared in The Christian Science Journal of June, 1898, with the knowledge and approval of Mary Baker Eddy.]

In view of the threatening conditions at present confronting Christian civilization, it is patently necessary that some answer be given to the query which appears at the head of this article. Many Christians, Christian Scientists in particular, have been confronted with the most sincere doubt as to what should be their attitude in the present conflict, even though the very foundations of what is termed Christian civilization are challenged, even threatened with overthrow and annihilation. Consequently, it is highly pertinent to review and reproduce in part an editorial written by Judge Septimus J. Hanna, Editor, which appeared in The Christian Science Journal for June, 1898.

This editorial was written during the Spanish War, when the United States was engaged in conflict with Spain on behalf of the people of Cuba, who for centuries had suffered severely under the Spanish yoke. It is not too much to say that, as much as Mrs. Eddy abhorred war, this statement represented her position when human liberty was at stake. 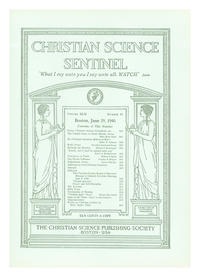