The early prophets, who were animated by spiritual inspiration, were so because they listened for divine guidance. That heroic prophet, Elijah, had learned thus to listen. At a period in the history of Israel when King Ahab had introduced the heathen worship of Ball, Elijah, in obedience to spiritual guidance, took steps to turn the nation from this false worship. Through the influence of his prophetic power, the people acknowledged the one true God.

Yet we find that his victorious conquest of the false prophets of Ball was followed by a sense of discouragement. Nevertheless, Elijah continued listening for spiritual guidance, and journeyed to Horeb, where he witnessed the strong wind, earthquake, and fire, and in the calm that followed the tumult heard "a still small voice." Here the prophet learned the gentleness of God, and was comforted with the assurance that his work had not been a failure. 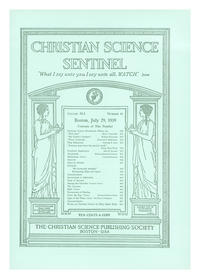