Jesus brought out significantly the need of watching to prevent ills from overtaking us when he said, "If the goodman of the house had known what hour the thief would come, he would have watched, and not have suffered his house to be broken through." And again, "What I say unto you I say unto all, Watch."

Jesus warned against spiritual apathy, that lack of selfknowledge which ignores the danger and goes to sleep on the watch, when we should be awake and alert to the approach of the enemy—wrong thoughts, thoughts which if indulged would lead us into temptation. The spiritual interpretation of the words, "And lead us not into temptation, but deliver us from evil," in the Lord's Prayer, is given as follows by our Leader, Mary Baker Eddy, in "Science and Health with Key to the Scriptures" (p. 17): "And God leadeth us not into temptation, but delivereth us from sin, disease, and death." From this we infer that it is not God who tempts us either to see evil or to do it, but the indulgence in wrong thoughts.

Send a comment to the editors
NEXT IN THIS ISSUE
Article
What Is Obedience? 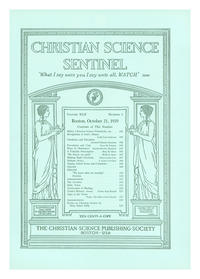