Twenty years ago I became interested in Christian Science...

Twenty years ago I became interested in Christian Science after attending a Sunday service at The Mother Church. During the following three years much time was spent in investigating and studying this Science. As a result of my study I was healed of bilious attacks, sick headaches, broken arches, and fear of contagion.

In 1918 a splendid healing of influenza was experienced through the aid of a faithful Christian Science practitioner. In 1920 I was healed of a severe sore throat in less than half an hour. The healing was accomplished without a practitioner's help, and has remained permanent. Since that time I have been healed of the tendency to take cold and to become easily fatigued, and also of considerable worry and nervousness. In a case of sprained ankle all pain vanished almost immediately. The experience was certainly a very convincing one, and the relief from pain almost unbelievable. 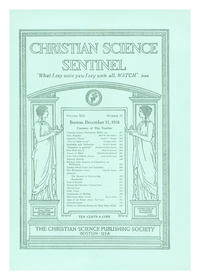