I am writing this testimony with an honest desire to help...

I am writing this testimony with an honest desire to help someone who may be brought face to face, as I was, with a disease supposedly incurable, and to express in a small way my gratitude for Christian Science.

In May, 1909, two physicians and a surgeon told me that a growth on my body was cancer. I was terribly frightened and without hope, because an aunt and my grandmother had passed on with that disease and I had helped to care for others suffering from this malady in a well-known hospital training school for nurses, from which I graduated. Although I had no hope that an operation would help me, I did not know what else to do, so all arrangements were made for me to go to the hospital. The day before the date set, a friend who had heard me talking about the proposed operation, sent word he would like to have me try Christian Science first, for he knew others had been healed. I had heard of Christian Science only once before. Eight years previous to this a woman who had a room where I lived came to me and told me she had been healed that day by Christian Science treatment of a disease she had had for eighteen years. I shall never forget the joy expressed in her face.

Send a comment to the editors
NEXT IN THIS ISSUE
Testimony of Healing
Joyfully I wish to express my gratitude to God, who in... 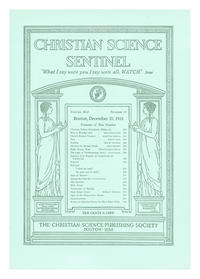