The belief about disease is that it may be chronic or acute, organic or functional, that it can change forms, move itself about, go and come, appear and disappear. Mrs. Eddy says (ibid., p. 419), "Disease has no intelligence with which to move itself about or to change itself from one form to another." This is the counter fact relative to disease, and this fact understood and proved annuls the so-called laws of mortal mind which are believed to cause disease to fluctuate, develop, relapse, or recur. 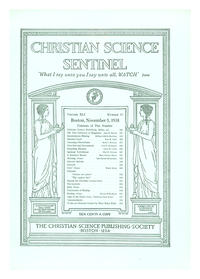