Human beings have always believed many odd things. Through false concepts certain mental pictures have been developed and accepted by them as natural effects of material causation. Even though oftentimes individuals, through a process of reasoning, conclude that such beliefs are fallacious, there is a human tendency to hold to the mental negatives from which images are quickly presented, often resulting in bewilderment and discomfiture.

For example, when the names of certain diseases are mentioned, mental pictures may flash, often producing waves of fear; when mention is made of the names of persons whose mode of living is regarded as undesirable, mental pictures may be projected with attendant animosity. Similarly, when descriptions of pestilence, disaster, and the like are heard, the human mind concurrently classifies the mental images, often disturbing the sense of peace. 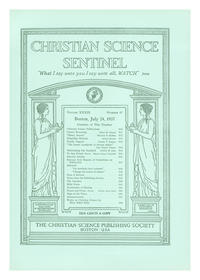