Throughout Mrs. Eddy's writings is found comforting assurance that Christian Science heals. Yet, in daily experience, how often is the operation of the divine law of healing seemingly impeded or delayed through the student's failure to realize this fact, and to reject as untrue any opposite suggestion.

The value of an affirmative attitude regarding the ability and availability of Truth to heal becomes apparent upon reflection. It may be said that in every problem presented for solution or healing in Christian Science, the argument of opposition to the healing power of Truth is encountered in one phase or another. For example, a physical difficulty may involve the belief that it is incurable. Or, if human thought concedes that a cure can be effected, it circumscribes this concession by a further claim, that the condition can be alleviated only in the manner and within the time which so-called material laws permit. Similar examples can be multiplied, prominent among them being the beliefs of lack and limitation. These latter claims frequently follow the belief of lost opportunity, or of opportunity seemingly limited through restrictions of business cycles or other man-made economic laws. 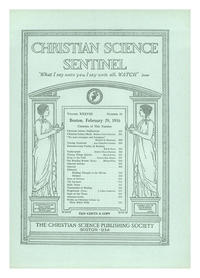