"There shall come in the last days scoffers, walking after their own lusts" (II Pet. 3:3)—In the best early manuscripts of the New Testament, including the Sinaitic, the Vatican, and the Alexandrian codices, we find the words "en empaigmone" (literally, "in" or "with scoffing") in addition to the word for "scoffers." This practical duplication is supposed by scholars to have been suggested by a Hebrew idiom which was employed to give emphasis, as in Genesis 22:17, where we read "in multiplying I will multiply thy seed." In II Peter, Moffatt translates: "Mockers will come with their mockeries in the last days, men who go by their own passions;" and Goodspeed: "In the last days mockers will come with their mockeries, going where their passions lead."

"Where is the promise of his coming?" (II Pet. 3:4)—While the Greek word "parousia" can, and often does, mean "coming," its more literal signification is "presence" (cf. Souter: Greek Lexicon, p. 194). Hence, one could render literally: "Where is the promise of his presence?" (implying, of course, "What signs are there of its fulfillment?") It is of interest to recall in this connection that in Matthew 28:20 just such a promise had indeed been given with reference to the continued presence of the Christ: "Lo, I am with you alway, even unto the end of the world," a passage which would seem to provide some further justification for the translation suggested.

Send a comment to the editors
NEXT IN THIS ISSUE
Testimony of Healing
It is with a deep sense of gratitude for the many healings... 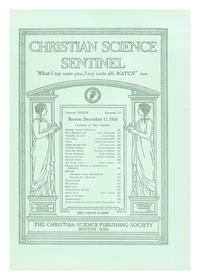