Many years ago my mother, after a number of operations,...

Many years ago my mother, after a number of operations, was given up by the doctors. It seemed that the surgeons, in their sincere effort to improve her health, had so changed certain organs that proper circulation was practically impossible. My mother knew that she was not getting any better, but no one would tell her the seriousness of her situation. A neighbor who was somewhat interested in Christian Science recommended that she try this Science. She did so and was completely and permanently healed in about one week. This was the introduction of Science into our home, and while we were overjoyed to have our mother feeling and looking so well, I for one was somewhat disgusted with the means employed. However, when she would request it, I would read the Lesson-Sermon from the Christian Science Quarterly with her because it meant so much to her.

One day when it seemed as if I could not tolerate this strange teaching any longer, I picked up "Science and Health with Key to the Scriptures" by Mary Baker Eddy, and began to read it, looking for flaws. Somewhere in the chapter on Prayer I read a few statements that I wanted to prove incorrect. I was young, but had suffered years of pain, and had prayed many times in vain that God would take away the pain. I had also prayed to Him many times to take me away I had been wearning eyeglasses for nearly ten years and was very happy to have this means of keeping me from suffering. When they were broken and I had no others to wear, I would become terribly ill. My freedom from pain seemed to depend entirely upon my glasses, so on this point I decided to test Christian Science. I closed Science and Health, laid the glasses on top of it, then did my best to invite my old pains. They just did not come, and the glasses were never needed again. That healing was many years ago and has been permanent. With my lack of faith in Christian Science, no desire to be healed by it, with resentment toward it and its Discovere, and anything but a spirit of love, still this healing was accomplished without the help of a practitioner or a treatment. This was a wonderful proof to me that God must be Love.

Send a comment to the editors
NEXT IN THIS ISSUE
Testimony of Healing
When Christian Science first came into my experience,... 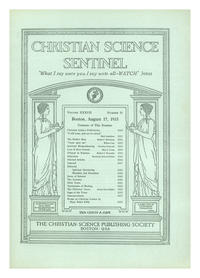