All orders and remittances for Mrs. Eddy's Works should be addressed to Harry I. Hunt, Publishers' Agent. One, Norway Street, Boston, Massachusetts, U.S.A.

Announcement is made by the Publishers of Mrs. Eddy's works of the publication of "Christian Healing," a sermon delivered by Mrs. Eddy in Boston, in the Moon system of type for the blind. It is worthy of note that this is the first religious work to be produced in Moon type in the United States. The plates were made and the book embossed int the plant of the Braille Institute of America, in Los Angeles, for the Trustees under the Will of Mary Baker Eddy. 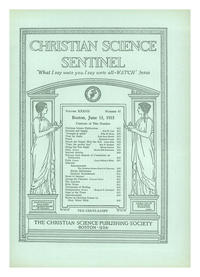