Intelligence through Conscious At-one-ment with Mind

During student days it frequently happens, especially at examination periods, that one is confronted by the seemingly herculean task of remembering an accumulation of facts. Yet, unless this can be satisfactorily accomplished, it appears that the right reward of daily work faithfully done may be lost. The very fact that this requirement is obligatory often causes confusion and a mesmerism of fear, and the student may find himself saying, in the words of St. Paul, "The good that I would I do not: but the evil which I would not, that I do."

On page 372 of "Science and Health with Key to the Scriptures" our beloved Leader, Mary Baker Eddy, has written, "Remember, brain is not mind." But error begins by reckoning intelligence as something apart from divine Mind. This is impossible because intelligence is the primal quality of God, divine Mind. In other words, Mind is the only intelligence; and Mind is not only omnipresent, omnipotent, omniscient, but also omniactive. Man is not a creator. He never originated anything. He has no mind which works independently of the divine source of intelligence. He can know nothing which is not already known to Mind. Man is reflection: he reflects the divine all-knowing Mind. Since this is the spiritual fact, if one thinks that he knows something of himself, apart from Mind, he is apt to believe that he can be forgetful. He may also conclude that his capacity for taking in and retaining facts is limited, and also his ability to express himself intelligently. 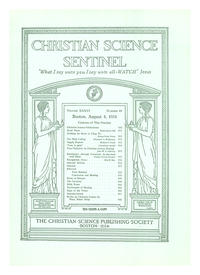