Christian Science Is for All

Christian Science is for all. How can we say that? Because it teaches the simple yet absolute truth about God and His creation which all men need to know. What do we find when we look around in the world of religion today? A great number of sects, differing more or less widely in their views of Deity, of man's relationship to Deity, and of man's relationship to man; differing widely in their views as to the nature of reality—real being. But there is the absolute truth about God and His universe; and Christian Scientists are convinced that Christian Science reveals this truth, that all men can comprehend it, and that were all men to comprehend it and apply their understanding of it there would be an end to inharmony, unrest, distress, and suffering in the world.

It will readily be admitted that if men were agreed on the nature of God they would have no difficulty in agreeing on all that pertains to God. In other words, they would have no difficulty in agreeing on the nature of His universe, including individual man. What, then, is the nature of God as Christian Science reveals it? Mrs. Eddy writes on page 140 of "Science and Health with Key to the Scriptures," "The Christian Science God is universal, eternal, divine Love, which changeth not and causeth no evil, disease, nor death." And on page 150 of "Miscellaneous Writings" she says: "God is universal; confined to no spot, defined by no dogma, appropriated by no sect. Not more to one than to all, is God demonstrable as divine Life, Truth, and Love; and His people are they that reflect Him—that reflect Love." 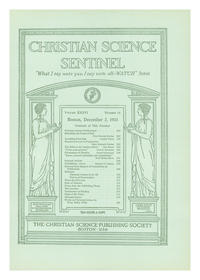