Christian Science came to me in answer to prayer

Christian Science came to me in answer to prayer. My young son had been attending an orthodox Sunday school for some time, and each Sunday morning it seemed hard to start him off to a Sunday school which he disliked. I prayed to God to be guided aright. A dear sister-in-law came to our home and asked us if we should like to go to the Christian Science services. Both my husband and I consented to attend church and to send our son to the Sunday school. After the boy came home the first Sunday, while we were at the dinner table, he said, as if to himself, "God fills all space." My husband and I looked at each other, and we knew by that one remark that the child had learned more about God than he had learned in all the months he had been attending the other Sunday school. At that time he was not a strong-appearing child; there was a tendency to take cold as soon as the winter came, and he would have signs of tonsillitis and severe sick headaches. In a very short time these spells were entirely overcome. That was sixteen years ago. Since that time we have experienced many healings in our family; healings of sprained ankle, sick headaches, tonsillitis, laryngitis; and I was healed of grief at the passing on of my husband. For the love and kindness of my dear Christian Science friends at that time I can never be grateful enough.

When my granddaughter was about eight years of age, she was thrown from a small express cart and broke her right arm near the elbow. Her mother had just taken up the study of Christian Science, and had not gained enough understanding to be of much help. The child was rushed to a hospital and the fracture set; but in about a month, when the doctors were ready to remove the cast, they found she could not move her fingers. They said some ligament or muscle had been caught in the setting of the bones and the arm would have to be broken and reset. Her mother could not bear the thought of such a thing, and called a Christian Science practitioner. In six weeks the hand and wrist were normal. The girl is now almost seventeen and has never had any trouble with the hand or arm.

Send a comment to the editors
NEXT IN THIS ISSUE
Testimony of Healing
Many blessings have come to me through the study of... 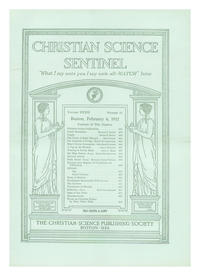