Students of mathematics prove they are making progress...

One of my greatest blessings came through experiences with two paralytic conditions. In the first experience, man-made laws and systems were resorted to. After months of suffering and illness I was, in a measure, restored to semi-invalidism: able to be up, but in such a weakened, useless condition that life carried no joy. After seven weeks I suffered a recurrence of this malignant condition; but in the second trial, having all my mental faculties, I realized that it was a "problem," and as all problems have an answer, it was for me to solve it. On analyzing this condition, I realized that my answer could come only from God, my Redeemer, the Giver of all good. A loving Christian Science practitioner was called in on a Monday, and she continued to work for me until the healing was effected. My husband was called from home on Tuesday, and he reluctantly left what seemed to be a hopeless human wreck. On Thursday evening of the same week he returned home, and I greeted him at the door—healed. During his absence from home I had an opportunity to be alone with God, to turn to God wholly, completely, and to realize that God was my fortress and my stay. Those three days of communion with God made me realize that "my redeemer liveth," and that He did not know anything about a deformed, suffering, useless body. I gained a genuine Friend, one that never fails. I was set free—completely healed.

Send a comment to the editors
NEXT IN THIS ISSUE
Testimony of Healing
I wish to express my gratitude to God for all the blessings... 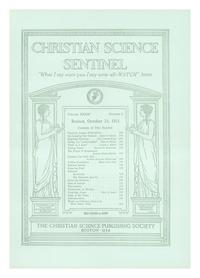