With the study of Christian Science there dawns upon thought an understanding of true substance which changes one's preconceived sense of values. The belief that money is power seems to be almost universally accepted as a fact. In a government mint men and machines are at work making the coins and paper bills which careless thinking would endow with power. These, however, but represent a value which the government issuing them authorizes.

In her answer to the question, "What is substance?" on page 468 of the textbook, "Science and Health with Key to the Scriptures," Mrs. Eddy says, "Substance is that which is eternal and incapable of discord and decay," thus establishing the spiritual nature of true substance. From this definition the conclusion is reached that when "the battle between Spirit and flesh is fought and the victory won" (ibid., p. 254) the symbol, money, will be among those things which are no longer needed, for divine supply will be understood to be altogether spiritual. 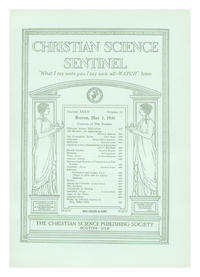