An interesting letter to Mrs. Eddy recently came to light in which the Trustees of The Christian Science Publishing Society responded to Mrs. Eddy's instructions to them and to The Christian Science Board of Directors in August, 1908, to "start a daily newspaper at once, and call it The Christian Science Monitor." The Trustees said in reply: "The announcement contained in your letter is good news. We are confident that this move is timely," and "we rejoice to have this additional opportunity of assisting you in your plans for the welfare of humanity." The Trustees moved with speed as Mrs. Eddy indicated, and had that day "consulted with the Board of Directors" and were to consult two practical newspaper men already called to Boston as "advisers." They expressed to Mrs. Eddy their thought that the Monitor would also "be a success from a business standpoint." 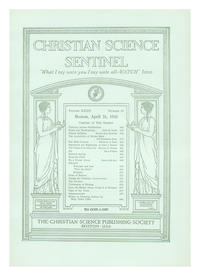