In your issue of November 16, it is reported that a well-known...

William K. Kitchen, Committee on Publication for the State of New Jersey

In your issue of November 16, it is reported that a well-known local Bible student in a recent address to a Bible study class said, in part, "that the so-called emancipation of woman is rebellion against the laws of the creator; . . . and that the false religions of the time, such as Christian Science, new-thought, spiritism, theosophy, and others, are all the work of Satan and nearly all originated and carried on by women," several of whom he mentions, and says that they are all "out of their proper spheres and thus susceptible to the wiles of the devil."

For the benefit of the readers of your paper, I ask you kindly to publish this letter in your next issue, in order that a vigorous protest and refutation may be lodged against his irreverent reference to Christian Science and his aspersions regarding its Discoverer and Founder, Mary Baker Eddy, to whom he refers in his article; and to say that the Christian Science religion should not in any way be confounded or coupled with new-thought, spiritism, theosophy, and the several other modern methods of mental practice enumerated in his article.

Send a comment to the editors
NEXT IN THIS ISSUE
Article
In your issue for September 1 appeared a letter concerning... 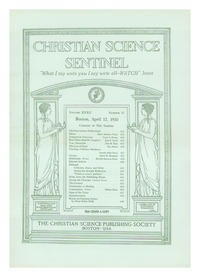