"Because your names are written in heaven"

When the seventy disciples whom Jesus sent forth returned to him rejoicing because even the devils were subject to them through his name, he said to them, "I beheld Satan as lightning fall from heaven," knowing that as the Science of Christ was demonstrated upon earth, the claim of evil must give up its pretense to power. He gently reassured them as to their dominion over all forms of evil; but warned them lovingly, "Notwithstanding in this rejoice not, that the spirits are subject unto you; but rather rejoice, because your names are written in heaven."

As the student of Christian Science turns to God, divine Mind, in his demonstration of eternal life, he acknowledges the eternal truth; he respects the infallibility of Truth; he reveres the unerring wisdom of divine Love; he contemplates the completeness and perfection and allness of the spiritual universe. His thought glows with the knowledge of the beneficence of God. In the endeavor to acknowledge only the presence of God, he sees the absurdity of the claim of evil that there is a kind of man which is imperfect, inharmonious, incomplete, subject to lack and discord. Through this mental process at least a modicum of false belief is assigned to its proper status of nothingness, and the student in some measure lays hold of the Mind which was in Christ Jesus, and humbly rests there. On pages 38—40 of "No and Yes" are found beautiful statements which may be regarded as complementary to the chapter on Prayer in "Science and Health with Key to the Scriptures." There, in "No and Yes," Mrs. Eddy writes, "The silent intercession and unvoiced imploring is an honest and potent prayer to heal and save." As the certain result of this metaphysical communion, healing is effected, and the student experiences the unmistakable joy which is a reflection of the joy of God, joy which cannot be augmented or intensified by any good which matter claims to offer, and which cannot be dimmed or diminished by any evil which matter may threaten. He experiences the peace of God, which is always the heavenly signet upon pure Christian healing. "Labour not for the meat which perisheth, but for that meat which endureth unto everlasting life, which the Son of man shall give unto you: for him hath God the Father sealed," Jesus further instructed his disciples. 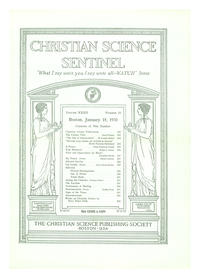