Nineteen years ago, after my mother's persistent and...

Nineteen years ago, after my mother's persistent and prayerful searching for many years for a truly satisfying religion had finally been rewarded by her being lovingly guided into Christian Science, and after my father and only brother had successively been convinced by actual healing of their own ills that Christian Science was demonstrable truth and a complete answer to all the problems of existence, and had become students of this wonderful Science, I still avoided it. I felt that I did not need it, priding myself on a sort of moral code, which included, however, nothing of regular religious observance and only the vaguest notion as to the nature of God and the meaning of life. I was also apprehensive that Christian Science might lead me to surrender something of value or satisfaction. Needless to say, I have since found this fear to be utterly groundless. I have never been deprived of anything but shadows and hardships, and my progress has been one of increasing substance and satisfaction in every direction.

I held aloof through four years at Harvard College; but the next year, while in the law school of that university and also teaching as an assistant in history in Radcliffe College, my material props began to fall away from me. Friends made the suggestion that I was carrying too much work, and I began to have the symptoms of a serious, chronic digestive derangement, which resulted in an alarming nervous condition. This developed to the point where the sight of a book and the thought of trying to study it would cause me to tremble all over. For about two months I was under the care of the university physician, with only an aggravation of all of the symptoms. For about ten days, then, during the Christmas vacation, I resorted to a doctor who had been our family physician and friend for years, only to receive the verdict that I would have to abandon study for the rest of the year in order to be restored to normal health. 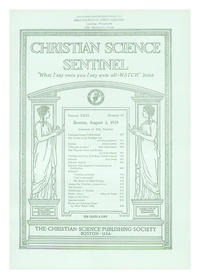