To one standing for the first time before Niagara's mighty cataract, intent upon the grandeur of the scene spread before him, the first impression is usually one of irresistible power. The thought of myriads of tiny rills and rivulets, each insignificant in itself, but all combining to produce this spectacle, may not at first occur to him. But gradually his thought travels back to these small beginnings, and he applies to himself the lesson that is so apparent.

When The Christian Science Board of Lectureship was established and made a permanent part of the Christian Science movement, no limit was placed by the Founder of the movement, Mary Baker Eddy, upon the good which was expected to flow to the world from the lectures delivered by its members. Mrs. Eddy has written regarding this Board (The First Church of Christ, Scientist, and Miscellany, p. 339), "The purpose of its members is to subserve the interest of mankind, and to cement the bonds of Christian brotherhood, whose every link leads upward in the chain of being." The noble purpose these lectures were designed to fulfill is being realized in a large way. Yet every Christian Scientist yearns for a still greater outpouring of good from this source, that his own refreshing and the healing of the multitudes who still stand in "the valley of decision" may be accelerated. 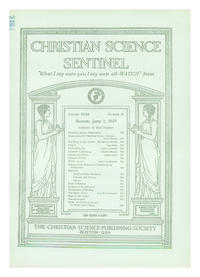