The secret spring of love and compassion which Christ Jesus, the master Christian, manifested during his life-work, was based upon his scientific statement, "I and my Father are one." He was so clearly conscious of the truth of being that those who came to him for healing were immediately freed. By this same conscious unity with God, good, he was able to protect himself from the opposing or unspiritual thought of those around him.

That Jesus lived the divine nature which he reflected is shown in his tender love and consideration for his disciples; in his compassion for the tired multitudes; in his freedom from resentment when wronged. When he was betrayed into the hands of his enemies, instead of sharing his disciples' indignation, he rebuked it; instead of rejoicing in an enemy's hurt, he healed him; and instead of condemning his would-be murderers, he prayed for them. What has this unselfed life done for us? It has given us a fuller understanding of the nature of God, divine Mind, who can be known only through the ideas which reflect Him. The teachings of Christian Science show us how the divine nature, manifested in the life of the great Nazarene, can be demonstrated through the understanding of the allness of God, divine Mind, and of man's unity with God. 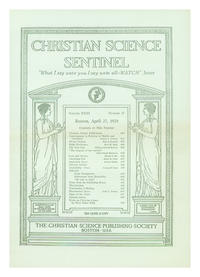