Denial that there is divine healing and criticism of those...

Denial that there is divine healing and criticism of those engaged in healing the sick by spiritual means alone, coming from a preacher in a Breckenridge pulpit recently, must be a surprise to those remembering the last command of Jesus to his followers as reported in Mark: "And these signs shall follow them that believe; In my name shall they cast out devils; they shall speak with new tongues; they shall take up serpents; and if they drink any deadly thing, it shall not hurt them; they shall lay hands on the sick, and they shall recover." Because many of the remarks of our critic were directed at Christian Science, brief space for correction is respectfully asked. The healings recorded in the Scriptures cannot be explained away as a special dispensation to Jesus of Nazareth, as was attempted by our critic; for the Old Testament also contains accounts of spiritual healing. Even the raising of the dead was also accomplished after the ascension of Jesus, as recorded in the New Testament, and apparently continued during the first three centuries of the Christian era. True it is that Christ Jesus answered John's inquiry as to whether he was the Christ by referring to his healing work; and equally true it is that he left the healing work as a test of genuinely following in his footsteps.

Our critic seems to believe that Christian Science healing is based on blind faith merely, and gives his view that many of those healed by Jesus were without faith. It is faith enlightened by understanding which brings permanent healing. Mary Baker Eddy, in the Christian Science textbook, "Science and Health with Key to the Scriptures," puts it thus on page 23: "Faith, if it be mere belief, is as a pendulum swinging between nothing and something, having no fixity. Faith, advanced to spiritual understanding, is the evidence gained from Spirit, which rebukes sin of every kind and establishes the claims of God." But, of course, there must be some degree of faith to cause one to seek for healing and then for the understanding of God's law which heals. It will be recalled that Jesus "did not many mighty works" in a certain place "because of their unbelief;" and that when his disciples asked why they had failed to heal the lunatic boy, Jesus answered, "Because of your unbelief," adding, to indicate the necessity for spiritual growth, "Howbeit this kind goeth not out but by prayer and fasting."

Send a comment to the editors
NEXT IN THIS ISSUE
Article
My attention has been called to the editorial remarks in... 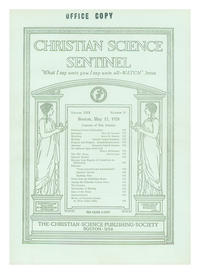